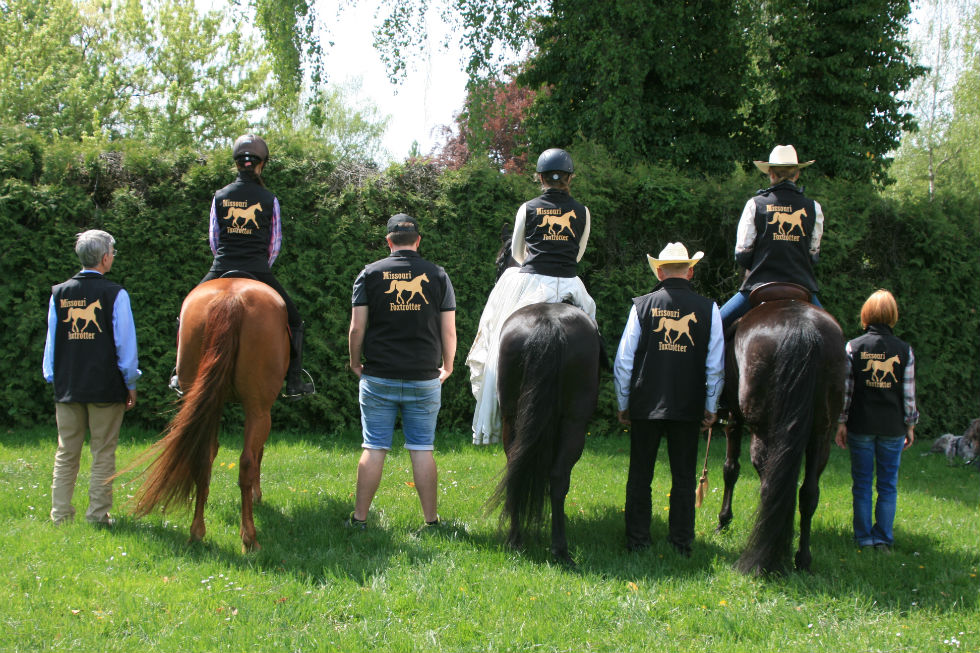 December 2017: Foundation of the association “Gangpferde Schweiz”. A community of equine interests will become an association with an impressive opening event: the “Gala of Gaited Horses”.
The colorful diversity of gaited horses with IGV competitions was informative and impressively presented on the grounds of the National Horse Center (NPZ) in Bern, capital of Switzerland.

The highlight of the weekend was undoubtedly the gala evening on the grounds of the “EXPO”. The main purpose of this event was to show the huge and yet largely unknown variety of existing gaited horse breeds in Europe and worldwide.

One of the milestones for this was undoubtedly the information event for the presidents and breed stewards of the various Swiss breeding associations of all non-gaited breeds. In addition, there were professional explanations to the individual breeds of Prof. Dr. med. vet. Ewald Isenbügel. Here Johanna made a presentation with Julia as a visual example.

In good weather on a spacious but advantageous split facility with an oval track, riding arena and stables, visitors and participants could experience the following breeds live:
– Aegiedienberger – Made in Germany American
– Saddlebred – The TV star from the USA
– Arravani – The tölter of antiquity
– Icelanders – The horses of fire and ice
– Mangalarga Marchadore – the all-rounder
– Missouri Fox Trotter – The Rolls-Royce of the Cowboys
– Paso Fino – The horses with the fine gear
– Paso Iberoamericano – Tölt and High School
– Paso Peruano – The sofa from South America
– Speed ​​Racking – Racing oil of the USA

In the breeds demonstration the individual breeds were presented together. In contrast to the small Icelandic horses with their curly manes stood the American Saddlebred. An elegant and expressive young stallion with an impressive stature. Impressively demonstrated by Walter Feldmann, Aegiedienberg.

In addition, another special highlight of North American horses was the Missouri Fox Trotter. An outstanding breed due to their diagonal gears! These “exotics” were presented by “Lucy in the Sky M” by Aurelia Reiser, CH; “Southern Smokey’s Julia” by Johanna Merk and “Velvet’s Giant Shadow”, Gerti Merk, both of Clay Pit Stables, Germany. Three informative breed presentations showed the enormous versatility of the Fox Trotter. Information regarding the origin and historical aspects of the breed as well as breed-typical demonstrations were expertly moderated and described by Tom Heberle. Tom also provided answers to the many questions from the professional audience and interested visitors.

Aurelia and Lucy presented themselves in classic English riding style with dressage saddle, accoutrements. They demonstrated elements of classic dressage riding such as B. Traversal, Short Returns …
Gerti and Shadow appeared in western outfit and mastered some trail obstacles, consisting of pylons, poles, tarpaulin.
The Johanna / Julia team demonstrated Julia’s tremendous aptitude in typical Model class with show bows and glitter headband.
Another focus of the breed show was Johanna’s appearance with a ladies saddle and a large riding skirt. All riding styles, of course, in conjunction with the basic gaits and the race-typical aisles Flat foot walk, Foxtrot, Canter.

The most striking part of the event was, of course, the grand gala on Saturday night. A varied show program took the 1,000 spectators into mystical and historical worlds of hippology across the globe. Prof. dr. Isenbügel and Eve Barmettler narrated and moderated the program throughout the show. From the Greek tigers of antiquity – specially arrived from Athens! About Vikings, Mongolian falconers about “Caballo Latino” with South American temperament to the southern flair and the Rolls Royce of the prairie. Nestled in various formations of quadrille, fast-paced Isi herd, horse and human in harmonious dance and elements of working with the Garrocha. Especially spectacular was the youth group with their Icelanders and various fire games.

The Missouri Fox Trotters even presented themselves twice: on the one hand as Cowboys Rolls Royce – authentic with the flags of Switzerland, Germany and of course the country of origin of the Fox Trotter, Missouri; on the other Western vs. Classical riding under the program part “Gaited Horses Today”.

All in all, a rousing gala with the participation of 200 gaited horses! For those of us from Clay Pit Stables, an absolutely enriching experience! Although our participation took enormous effort (customs, preparation time, costs), We (Aurelia, Johanna and Gerti) are very proud to have been there to represent our beloved breed.

Our special thanks to Aurelia, who provided us with the necessary contacts and correspondence with the organizers of the event. Also, Tom, without whom as the main sponsor, speaker and Foxtrotter owner, we would not have been able to attend. Another thanks goes to our indispensable super team Katharina, Peter and of course Flo. Thanks also Birgit for being there and taking many beautiful pictures.

It is to be hoped that, as already planned, another gaited horse gala will be held each year in France and in Berlin in 2020. After receiving a lot of positive feedback for our performances, we are convinced that the effort for the breed as well as for our still young breeding association has been absolutely worthwhile and will continue to be useful in the future.

Breed show of EMFTHA e.V. at the Clay Pit Stables facility on August 6, 2018 in Altusried, Bavaria